Yoga in the `west` seems to be entering a new phase.  Even as it is becoming more mainstream and popular, there is a growing unease about the apparent absence of spirituaity in much modern teaching.  Is this through lack of knowledge, fear of misunderstanding, or a real lack of spirtual feeling in many of those who are teaching yoga?  Particularly how are we to teach yoga, interpreting the teachings in a Christian context if necessary, when we know so little about the vital links between Sanatana Dharma, or just Dharma - commonly, but incorrectly called Hinduism, and yoga.

We are fond of saying that Yoga is not a religion, but a philosophy or a way of life.  Similarly Dharma is not a religion in the traditional meaning of the word.  A religion is by and large a man made practice.  Religions have developed, and will no doubt continue to develop, in response to man`s need to codify beliefs in relation to a concept of God.  Dharma is concerned with the underlying truths of nature`s law, and as such forms the basic beliefs of all true religions.  Through time, misinterpretation, or relgio-political machinations these basic truths may be distorted, sometimes out of all recognition.

The core beliefs of Hinduism (I use the word which is perhaps more familiar to readers than Dharma) equate closely with the Commandments of the BIble.  There are some key beliefs however which are intrinsic to Hindu belief.  The law of Karma, reincarnation, vegetarianism, and freedom of choice may appear to have little relevance to the commandments, until we begin to apply them to the teachings of the yamas and niyamas.

Vegetarianism stresses the importance of Ahimsa.  Compassion for all life is a logical extension of compassion for those near to us who we may love.  It demonstrates unconditional love.  Other dietary and moral considerations do of course, also play their part.

Reincarnation challenges our materialistic belief system, where we can only believe in that which we can see and touch.  We forget that reincarnation was a feature of early Christianity, and of some of the sects which were persecuted once the Roman church had decided to discard the concept of reincarnation.  But even if we reject the idea of physical reincarnation in its simplest form, Christianity has at its heart the teaching of life beyond death, and of the second coming of the Christ.

The law of karma can be used to explain many of life`s problems.  We scoff at the idea of karmic law as we think we see it taught in Dharma.  And yet we have a legal system which is based on the same interpretation.  We may have moved from the crude `eye for an eye` standard of justice, but we still expect the wrong doer to have to pay for their crimes.  We are often quick to say that someone got `their just desert`.. Extending the same concept to reincarnation is not impossible.  Whether we believe in a judgemental god or not, it does seem a more compassionate option for the sinner to have  the chance to atone for his sins in another life, rather than being cast into eternal damnation.

Freedom of choice is a freedom which we claim to hold dear to western civilization, inspite of the evidence to suggest that we can only accpet that as long as we are agreed with.  We all know what is best for others - everyone should be practising their yoga!  We may no longer burn witches at the stake, but we have little time in our society for those who deviate from the normal.  Some aspects of Hindu life can seem to us in the west to be irrelevant to modern life.  We are quick to condemn the caste system as we interpret it, arranged marriages, and the confusing mutiplicity of Hindu gods and goddesses.  We easily forget that our own attitudes towards divorce and remarriage in a church, contraception and even the denial of the personal choice of the time of our death, are cultural tradtions which we have espoused.

As for the multiplicity of deities, Christianity certainly seems to make things much easier for the devotee who apparently need only remember and believe, that there is one God, his one Son, Jesus Christ,  born of the virgin Mary, and the company of angels, archangels, saints and cherubs in sufficient number to fill acres of painted frescos, and provide names for all the parish churches of Christendom.  Amazingly Hindus are given the freedom of choosing to believe in one god, male or female, or many gods, each one but an aspect of the single god: or no god at all.

In essence what Hinduism acknowledges, is that the human mind with its limitations, finds the Infinite a concept beyond our understanding.  Giving human, or animal form, to a concept of god does not make that form God.  In the same way the statue of Christ on the cross, or the risen Christ is not Jesus.  Symbols speak strongly to us in our subconscious mind, and it is from there that we can begin to experience their real meaning.

If we look at the origins of Dharma we are again thrown into some confusion.  Much of the taught history of the Indian sub-continent was established in the 19th C. by European colonialists.  It is amazingly easy to interpret facts and apparent evidence in ways which support our own preconceptions.  It still happens in the interpretation of modern scientific data.  What is known is that the origins of the teachings of Dharma go back much further than the two to three thousand years that was being taught not so many years ago.  Even the whole idea of an Aryan invasion of the sub-continent from the north, overrunning a primitive and uncultured scociety has been thrown into doubt.  Evidence suggests that the very origins of civilization as we know it may have begun in the area of south India many, many thousands of years earlier.  The remains of sunken cities drowned at the end of the last ice age suggest advanced city cultures whose influence spread right around the world.  It is unlikely that in such societies there was no spiritual tradition.

We know that around the world in ancient times there were pagan religions, each peculiar to their own society and the part of the world in which they developed.  We have always tended to to smile rather condescendingly at the concept of druids in oak trees cutting mistletoe, mid-winter sacrifices, and fertility rites.  What we are now realising is that each of these pagan religions was based on an intimate, perhaps 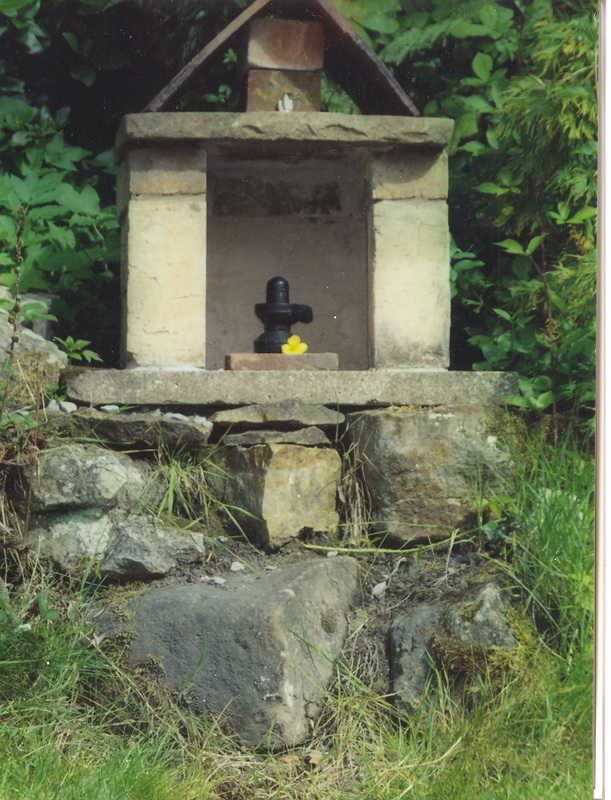 ​intuitive, but also no doubt carefully observed understanding of natural processes and the interrelations of the whole living cosmos.  This is knowledge that we can only scoff at, because we do not understand it, because we have become coarse and insensitive in our  relationship with the earth and the universe.  The pagan religions relied not on a teaching of dogma, but on original science - Dharma.  Dharma is the science of truth.  It`s very reason is to discover truth.  Truth can only exist unfettered by dogma.  Yoga, and the associated practice of ayurveda should be the purest experience of Dharma.

Unfortunately perhaps, the rise of patriarchal societies, organised priestly hierarchies, and the general material specialisation which has culminated in modern `western` capitalistic society, has destroyed almost entirely those pagan religions in their original format.  Judaism, Christianity and Islam, even while being based on the original teaching, and absorbing the more popular aspects of the pagan religions (people do like a bit of fun), have been the greatest vandals in that process.  Modern revivals of western paganism are an attempt to recreate something of the original.  However, only one living major branch remains, perhaps the oldest and the one nearest to the original - Dharma, now somewhat codified into the religious practice of Hinduism..

Hinduism appears to be culturally an Indian perogative, but it would be useful to see beyond the more superficial aspects of Hindu religious ritual and symbols.  It is worth reiterating that Hinduism`s traditional tolerance which allows each individual to have their own ishta devata (personal understanding of God) is not a sign of a belief in many gods, but that god appears in a different form to each of us, and can be worshipped, or not, accordingly.  Because a Greek Orthodox Christian may have a very different relationship with the concept of Jesus, does not make him more or less Christian than a Southern Baptist of the USA.

Rituals and symbols, are a feature of all known religions.  They may awaken a conscious awareness, but more important is their effect on the subconscious.  Understanding the language of a ritual or a symbol, or their particular significance is not always important.  By their very nature they powerfully affect us.  In western culture we have lost much of our sensitivity to symbolism but there are still potent symbols which do affect us.  Red, signals danger, action, passion.  Green is safe and calm.  Square shapes are stable; circles unstable.  We are affected by light and dark, and so forth.  Rituals often use these little recognised symbols to heighten our responses.  Church music, candles, incense, the sanctity of the inner chambers and altars, all act as tools to awaken within us a realisation of what is within ourself - our real Self, and our relationship to the Divine.

The significance of Indian culture is particularly important to anyone purporting to study or practice `Yoga`.  Of all surviving preChristian civilizations, India, in spite of its more recent history of invasion and colonisation over the past two thousand years, has retained the only inate concept of dharma as a basis of the essentially pagan religion commonly called Hinduism.  More importantly, outside the mainstream of religious observances India has produced an endless stream of great spiritual masters.  Hardly a century has gone by when such a Mahatma has not continued, revitalised or furthered the spiritual growth of the people by his/her message.  These spiritual giants, have affected the lives of millions of people, both on the sub-continent and around the world, and their effects have continued through to the present day.  Such men as Vivekananda, Sivananda, Ramakrishna, even Mahatma Gandhi, are merely the more modern equivalents of Thirumular, Matsyendranath and Patanjali, siddhis of almost mythical significance.  To remove an acknowledgement of their influence from our modern understanding of yoga, really does reduce it to a system of psycho-physiological exercise, and its teachers to slow motion exercise and relaxation experts.

Whatever our chosen form of yoga, it is important to recognise, and try to understand, something of the historical, cultural and spiritual discipline it is coming from.  For the exceptional who are born as fully realised souls the need for study has been removed.  They are beyond it.  For us mere mortals our journey through yoga may be a lifetime`s adventure. Eventually we may well find ourselves being drawn to one form of yoga or another, but let us at least aquaint ourselves with the dharmic cultural basis from which we can grow towards enlightenment.

This article was written under the guidance of
Sri Krasna Das (Suresh Rajpura ji), The Aum School of HIndu Studies, Birmingham.